ANTHROPOCENE AND ASYLUM comprises of two parts. The first is a grouping of works that could be loosely termed paintings but are more aptly described as assemblages on canvas. These were made by James Robinson while he was guest artist in a residency programme, hosted by the Dunmoochin Foundation near Melbourne, during 2014.
Having made the paintings James invited poetic response and the second part of this exhibition is a series of works on paper which relate to Six Sonnets, poems written by David Eggleton after viewing James’s paintings.

Artist’s statement:
I made these outside in the bush at an old art colony near Melbourne where I was a guest. I felt displacement … and grief for the original “owners”, the Wurendjeri, and that fed into my lifelong themes of art … human survival and accountability to our unsustainable addictive culture.
So abstract expressionist mixed media work allows me to access an unconscious, emotive, empathetic resonance of an ancient/human/soul/heart/mind the cave … the birth/death cycle, fear, love … consciousness. We are part of this event of life…
Art’s a fragile bridge between worlds … in this case a Booshwaa apartheid world of affluence and state sponsored racism … and irresponsible global climate change denial.
I’m pleased with this away mission and the resulting monochromatic palette that mirrored the mono-cultural globalist themes of our extinction and lemming-like engineered consent.
Kia ora / amen

SHORT ESSAY about this series of works, written by Brendan Jon Philip.
‘The ephemeral time and place of that restricted moment we call a life burns like a persistent ember in the ashen hues of James Robinson’s oeuvre…’ more

The works on paper are less abstract. They contain figures, contexts, symbology, and words. Sometimes James quotes a single phrase from one of David Eggleton’s poems, working it into the imagery as a descriptive line, other times he recites the whole thing and the poem and drawing appear on the page as companions with symbiotic rhythm.

One of David Eggleton’s Six Sonnets: 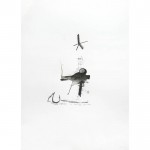