“Drawing and painting are separate processes, yet linked together in a morphology of random moves.”
(Philippa Blair, 2016)

The sense of structure in Philippa Blair’s drawing and painting often starts with a geometric or gestural diagram. This diagram sets down an embryonic rhythm. A rhythm that is physical but also emotional. Blair then reveals and layers. She works into, across, around and out of the rhythm. Challenging the sense of structure is integral for Blair.  She “discovers, rather than delineates new forms.”

When viewing the installation of 25 décollage drawings at PG gallery192, Blair’s commitment to the investigation of the diagram becomes apparent. Décollage is the act of removing, cutting and tearing away pieces of an image to reveal a new one. There is an archeological aspect in her searching for something that does not yet exist. Blair employs tissue, graph paper, ink, gouache, graphite, charcoal, paint and found objects. The drawings reference aerial views, with linear constructions conjuring up topographical notations and hinting at the elegance of calligraphic marks. Blair refers to them as “raw layered paper works that have been drawn, glued, fractured and reassembled.” She continually questions how to resolve or dissolve structure as her drawings shift and change perspective. She talks about the delicate balance between order and chaos; something she is continually negotiating.

For Blair, drawings happen before and after painting and are not necessarily preliminary workouts for larger scale works. Although, through drawing, ideas are released that may emerge in painting later. Central to all Blair’s work is the hand/eye/brain synchronization. This involves highly concentrated effort and fitness to the task. The eye and brain make decisions. But it is the hand, arm, and body that is charged with making those decisions manifest. The body leaves its traces. This act of drawing builds confidence in Blair’s muscular responsiveness. It sharpens coordination and is a form of graphic play.

In the main gallery, the large triptych Bombora has bold trajectories that are created with the full extension of Blair’s arm, powerfully pushing and pulling paint across the white gesso canvas. Bombora is an aboriginal term that sometimes refers to surfing culture and the build up of a sudden wave. This is felt when examining the work; it is a journey for the viewer. The left canvas of Bombora begins with orange and green lines crossing with confidence then three scratches quickly move the eye across the swirl of blue. Once arriving in the larger middle canvas there is plenty of action. It’s nice to linger in the pooling pigments of blue and gold while the peripheral elements move around quickly. Meandering down the squeegeed curved line is interesting due to its varying intersection. The dark spots to the right are purposeful pauses before being whisked across to the final small canvas. Organic marks overwhelm the geometric remnants on this canvas and it is a breathing space after the previous central crescendo.

The visual journey is not only created by Blair’s gestures, but also comes from her own internal and external experiences, and her intuition. She reveals, “The paintings evolve and revolve around the exercising of the brain and muscle into working “walking” drawings. They come from experiences that can relate to memory.” She also sites linguistics, maps, musical scores, charts, travel and directions as stimulus. Life comes into it too. Her own relocation back to New Zealand after twenty years in the United States is a fundamental influence with much crossing of ocean and land, and the move from a continent to an island.

Moving around the gallery space the next works are small and tight in comparison to Bombora. These paintings were made in 2014 at the Lot23 film studio residency in Auckland and are part of the Minnie Street series. They appear experimental with curtains of silver and slithers of white, black and pink. We see stages of exploration, coming together in Minnie Street 4 where the raw canvas from beneath the painting seems to be re-layered on top. Though still striking, these combinations feel contemplative, reflecting Blair’s emotions as they were created shortly after her mother passed away.

The second large painting in the gallery takes the viewer on another journey that keeps pushing the boundaries of the linear scaffold. Scappare, a diptych, has been built up with dramatic accents of white and black scraping through to limey green from punches of pinks.

The painting is connected to the idea of the fugitive, as scappare is Italian for escape. Blair recalls the feeling of “driving the hectic SH16 to the studio from home, the broken and repaired motorway is a jungle of disappearing signs and lines to follow. Changing each day and challenging to decipher in the rain. One is always alert to new exits, lanes and changes of barriers.” In this scenario Blair plays the part of the fugitive, but there is also an underlying notion of hope and tragedy in Scappare that the artist likens to listening to Puccini’s opera Madam Butterfly.

There is immense emotional and physical commitment involved in the creation of Blair’s dynamic abstraction. She is not afraid of failure, taking inspiration from the great American playwright Sam Shepard when he said, “You can’t make a mistake when you improvise… it’s like drumming, if you miss a beat you create another…” 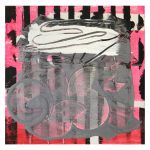